Create Your Own Reality

I have just finished my first Bouldering World Cup in four years. The standard of the climbers, and of the setting has gotten higher and so I am proud to feel like I am “keeping up”. Instead of the a debrief of the competition, I decided to write this blog on a new mental technique I have been trying – ‘create your own reality’ (or ‘fake it til you make it’).

I started using this before the Canadian Lead Nationals last month, and I did far better in that competition than I had expected, and I used it again in this competition and I was very happy with my mental performance all throughout.

I think that I am often held back by being ‘realistic’ in my headspace in competition – what is a realistic goal for me to have? Am I realistically strong enough to do x, y, z? Realistically, who is my competition? etc. But in some ways, this is just another mechanism for protecting myself from the disappointment of dreaming big, and then potentially not performing at that level. The ironic thing is, in my experience, if you step fully into the vision that you have for yourself, the actual outcome is not really as important anymore, and the disappointment is actually lessened because the process was empowered.

So what do I mean by this? Going into Canadian Lead Nationals I felt at a disadvantage. I had never competed at this level in lead in Canada before so my experience was lacking, and I didn’t know the field. All I knew was that lead is not my strongest discipline, but I had been training hard and was as ready as I could be.

I realized that I was thinking in terms of being in the middle of the field, and chasing those higher up.

This realization allowed me to flip my perspective to “I am the one they are trying to beat.” Through repetition and embodiment of a visualization of this, I allowed this perspective to become my new reality – now they were chasing me! It didn’t matter whether or not this was actually true, it only mattered that I believed it. There was a sensation of relief as the anxiety and pressure about beating others turned to the empowerment of ‘I just have to run my own game’.

In the Bouldering World Cup, it was holding the reality of “I have already made semi-finals.” Again, whether or not this was realistic didn’t matter, but the belief allowed me to focus just on executing in my performance – not on the result, or the individual problems. And even when I didn’t get to where I wanted to on a problem, I was able to say, “It’s OK, I’ve already made semis so what I did was enough.” 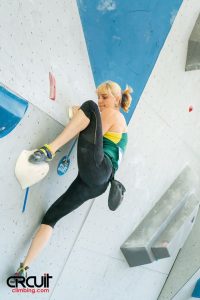 In the end I didn’t make semis, but it was close and I had a great round and climbed well. I didn’t feel stressed about my performance at any point, or anxious that what I had done was ‘not enough’. The EXPERIENCE of the competition was so much more enjoyable than if I had let it be dictated by perceived reality (vs created reality).

This may sound like a visualization technique, and it is; the big distinction for me is the process of not just seeing images of what you hope to achieve, but stepping into those images until you believe their truth. Embodying the vision so that while you realize that it is created, it becomes just as powerful as ‘real life’.

It worked for me at the 2016 Australian Bouldering Nationals, though it was not quite as intentional. It worked at these past two comps, and although it is taking a while, I am working towards embodying my vision of being an Olympian. On reflection, I also notice that this has successfully taken place in other parts of my life so perhaps I need to be more intentional elsewhere as well.

Other notes: You don’t want to deny yourself the necessary space to process real emotion – this it not about bottling up feelings or denying them because they don’t fit with this created reality. However real emotion should also not be confused with self-doubt and messages from your inner critic. These two processes are distinct from, and cannot co-occur with, the embodiment of your vision. You may flicker back and forth between them – and acknowledging when this happens is an important part of becoming truly invested in the vision – however the goal is to spend the most time in your own intentionally created reality. Processing emotion and dealing with the inner critic are whole other blog posts. 😛