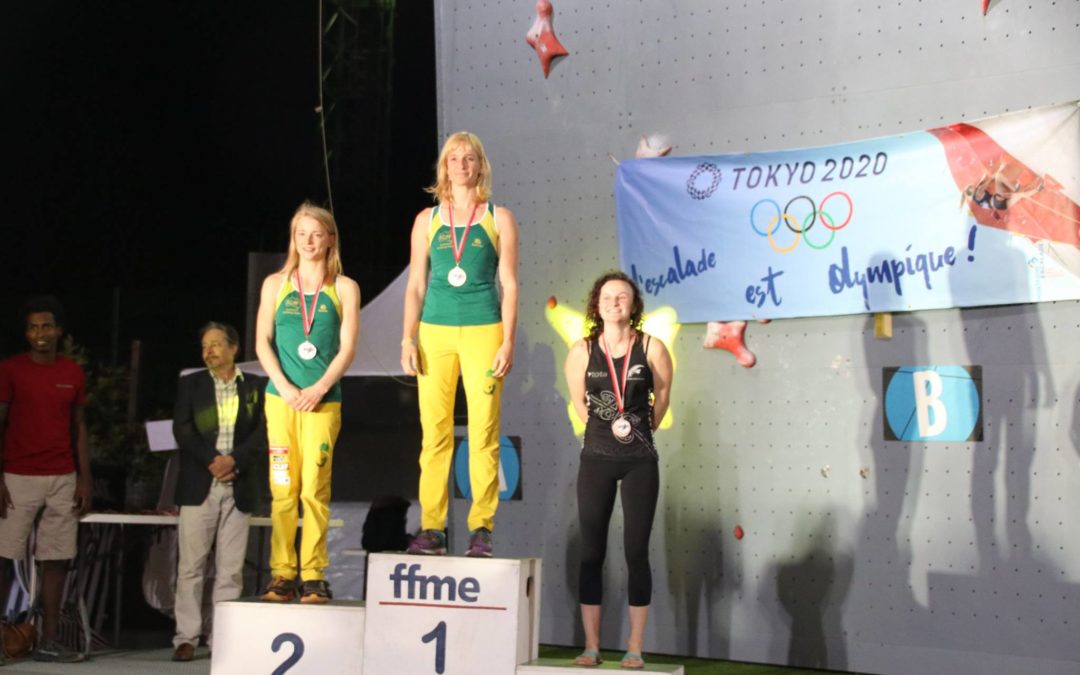 Photo: Standing atop the podium at the 2017 Oceania Continental Climbing Championships

This past weekend marks the dates that the 2020 Oceania Continental Climbing Championships was supposed to have been.  The competition that was to decide my fate for the next six months. The event that would tell me if my Olympic dream was over, or pushing onto an even bigger stage.  But it was not to be. Continentals was postponed, followed by the Olympics. At this point there is no certainty on how and when Olympic qualification will take place.

When I wrote the quote on my most recent social media post originally, the outlook was for maybe a three month delay for Continentals and the Olympics continuing as planned.  Even before I posted that though, there seems to have been an assumption by some people that with the postponement of the 2020 Olympics to 2021, that I would just keep working towards this same goal for potentially another year.

My comment in the post below was from last week, but still reflects the situation today. I am sad that the Olympics will not be going ahead in 2020, but it is the right call. … Reposted from @ausclimbing ✨ "In these challenging times, it is necessary to be adaptable and flexible to whatever is thrown our way. This is also a necessary skill for an athlete. After almost three years of training specifically for the Oceania Continental Climbing Championships (Olympic qualifier), it is definitely a shame to not have the competition go ahead as planned, however the decision to postpone is the right one given the circumstances, and an opportunity for us to practice our resilience. Now is the time to look after ourselves and our loved ones, and focus on those most vulnerable in our communities; so that when we come back to normalcy, we come back stronger and more united. I look forward to training again when the gyms re-open, and finally competing in the Olympic trials when there is an opportunity for that to happen safely. Stay healthy everyone. ❤" Very wise words from Australian Team Member, @tiffanymelius. Tiffany spent 2019 as an Australian Team member of all 3 disciplines, competing on the @ifsclimbing World Cup circuit and at the World Championships in Hachioji, Japan adding to her extensive list of competitions as a member of the Australian Team over the years. These years of experience in climbing & competitions will serve you well Tiff. 🤩👏 📸 Photos by @thecircuitclimbing and @vettiharrison … #TokyoTogether #ClimbToTokyo #UnitedByEmotion @pinnacle_sports @flightcentreau @climbbase5gym @evolv_worldwide @evolvcanada @vervehairlounge @chewiemedia @hiveclimbing @hive.yogaandfitness @westcoastosteo @sportclimbingaustralia @teamaus @australian_institute_of_sport @ausolympicteam #teamevolv #openmyworld #climbpinnaclesports #pinnacleathlete #climbing_pictures_of_instagram #climbingismypassion #training #athleteslife #athlete #girlswhocrush #girlswhoclimb #fitness #fit #fitspo #fitnessmotivation #championher #wildwomen #sportclimbing #olympicclimbing #competitionclimbing #gameon

While it’s flattering, that everyone thinks I am so determined and ambitious that I will stay the course no matter what, the reality is, it’s not that simple. For some, deciding to just stay the course for another year might be an easy decision: “The goal hasn’t changed, it’s just the timeframe that’s shifted.” For younger athletes that might be the case – because they seem to have all the time in the world to pursue their Olympic dream – but for me, the decision requires much more deliberation.  Here’s why:

I am currently living on a parttime non-profit sector wage. I have a mortgage to pay. I live a comparatively inexpensive life, but it is a life in an expensive, first-world city nonetheless. Can I really go another year scraping by from pay cheque to pay cheque, saving nothing, and relying on the kindness of donors and sponsors to pull me through? Do I want to?

I am the Executive Director of a community mental health non-profit organization.  A year into the role, I decided I wanted to pursue the Olympic dream, and in order to do this I needed to move to parttime work.  My Board was supportive, but it was very difficult for staff – for various reasons, but – imagine that the CEO of your company all of a sudden decided to go parttime to try to qualify for the Olympics.  It does create challenges. And there was a time limit on this – staff have endured knowing that in either March, or August 2020, it would be over – I would come back fulltime. Now there is potentially another year of the juggling act, both for them and for me.

Two and a half years ago I made the decision to put starting a family on hold to pursue this Olympic dream.  At the time I was 34, and hitting pause until I turned 37 still seemed realistic and fairly low risk. My partner and I both ran through fertility testing to ensure that there were no foreseeable problems that might get in our way later if I waited (there weren’t). But becoming a mum is one of the biggest spaces I have held in my life, for as long as I can remember.

When I was around 10, I remember holding a baby relative and knowing that this was something I was destined for someday.  I had planned to start having kids at 30 – when my mum had had me – an age that I felt wasn’t too young that I hadn’t lived anything of my own life yet, and wasn’t too old to not be able to relate to my kids as teens. When life circumstances did not eventuate to support that plan, I was flexible and adapted, and felt confident in the faith that when the time was right, it would happen.

I thought that that time was 2017, but then the Olympic announcement came along and threw a spanner into those plans.  My life took an unexpected turn, and my priority became trying for the Olympics – with the thought that if I chose motherhood without seeing how far I could go with my competition climbing, that I would probably regret it later.

I have been enjoying the past few months, knowing that my Olympic journey has been rewarding, but is drawing to its natural conclusion.  Now with an extra year on the table, I just don’t know if I can sustain it. I don’t know if I want to.

I want to see things through until there isn’t anything more to be done. I want to complete my last big competition – whether that is Continentals or the Olympics.  I want my donors and supporters to feel that I used their contributions well, and not towards an incomplete journey that quit before the end (what an anticlimax!).

I am also tired. I have been pushing my 30-something body to its limits, which has pushed my emotional and mental health in the same way. What felt like prioritising in the beginning feels like sacrifice now.  My process goals for this journey were to learn and grow along the way (and share what I’d learned), and to see how far I could go in competition climbing within the circumstances that I have. Realistically, I am not the frontrunner for the Oceanic Olympic spot.  My chances of qualifying for that one spot are low – and they get lower the older I get and the more developed and experienced those 15 and 16 year old competitors coming up fast behind me get. Is another year of time, money, and energy worth it? (Especially if they have home climbing walls and I don’t!? :P)

That’s what I need to figure out.  This is not a case of resilience – I don’t feel knocked down or defeated by the postponement.  This is a case of priorities. I feel like I am being given an opportunity to reassess where I am at in my life and make the best choices to follow my heart.  That may be to stay the course, or it may be to follow another one. I don’t know yet. I need to give myself time to grieve the closure I thought I was going to get, and create space for a new future, one that hasn’t been considered yet.