There is so much I want to write. So many details that I don’t want to forget. But already, at five months post-birth, there is so much I have already forgotten.  I attribute this to 1) the age we live in where all the information we need is at our fingertips, and so we have reduced our capacity for memory; 2) mom brain – the deep fatigue of months of broken nights and lack of sleep that have reduced my capacity for concentration and retention; 3) my continuous endeavour to live fully present and in the moment – when I truly do this, I am living so presently that the moment is 100% lived and no information is stored away for later.  So here is what I remember, through the lens of 5 months post-partum.

The day before I went into labour (December 27, 2021) my mum and I went shopping.  We had a bunch of errands to do, and I am so glad we did them that day, as it wouldn’t have been possible later.  I was on my feet and walking for hours, and mid-afternoon I felt a heaviness, and ‘locking in’ in my pelvis that I hadn’t felt before.  Once baby moves into the pelvis it can still be hours or weeks until labour starts, so while I noted this, I didn’t necessarily think anything of it – Eva’s estimated date wasn’t for another six days and first children often come later than their estimated dates.

Due to my significant reflux during pregnancy, I had moved to sleeping on the couch, where I had a corner that I could prop myself up in to sleep.  Due to this, Simon and I hadn’t slept in the same bed for months. I missed him and asked him to sleep on the couch with me that night, which he did.  I guess that got the oxytocin flowing…

The morning of December 28, 2021 I woke up around 7:30am with loose bowels and what felt like menstrual ache. By the time Simon woke up around 9am the ache had turned into waves, and contractions were coming regularly – between 5 and 10 mins apart and lasting between 30 and 60 seconds. Knowing that I was in early labour, my mum and Simon and I started preparing our living room as a labouring space.  We covered the clocks so I could be fully present (all times listed in this blog were pieced together after the fact), put up pictures of my grandmothers, and mounted the prayer flags with inscribed messages from my closest female friends and relatives. 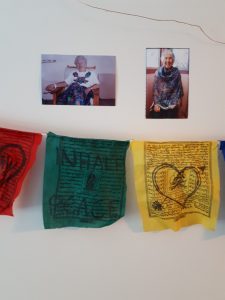 At this point I was totally fine between contractions, though I had to stop whatever I was doing to breathe through them.  I was able to talk through them if I wanted to, but it was nicer to just breathe and connect with my body. Around noon I let my doula know I was in labour. 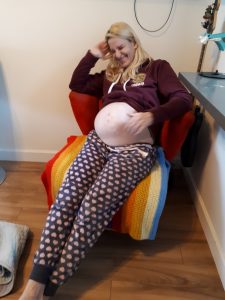 Around 6pm I called the midwives on-call phone to let them know that I had been labouring for around 11 hours and contractions were getting more regular at 45-60 seconds long and 4-6mins apart.  The midwife on-call said she was tied-up at the hospital with another birth so we would not be able to have a home birth, but would need to come to her. I had planned to stay at home as long as possible, knowing that the hospital was only 11 blocks from our apartment.  I was open to a home birth if I felt comfortable, but wasn’t attached to it. No worries, we thought, things could still take a while.

I took a bath and quickly realised that I was not comfortable there – I would not be labouring in the tub, or having a water birth. I needed to be leaning forward on all fours, and was alternating being super hot and super cold (being wet isn’t great for thermoregulation).  I threw up once (a marker for moving into active labour), and found the position that I would be in for the next few hours – arms propped on the seat of a low armchair, knees on the floor, a cushion between my legs so I could rock back on it and sit up between contractions. It was at this point that I grasped a small stone in my hand – a gift from my sister, a souvenir from Sombrio beach taken during an overnight hiking trip that we’d done together during the summer.  This stone gave me something to focus on during my contractions, something to breathe into, to ground, centre, and focus my awareness on. Such a small thing made an incredible difference as I navigated the stormy waters of labour. 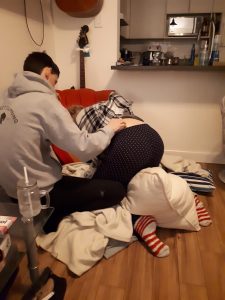 At some point around 8-8:30pm I felt a turning point. I didn’t know if contractions were actually getting more intense, or if I was just getting more tired, but I made a conscious choice to start vocalising. I could have continued to breathe and silently endure, but I realised that that would have been because I didn’t want to be embarrassed by the noises I made, or because of some ego-driven show of strength. So I gave in to my natural instincts to groan, and so moved into active labour.

By 9pm contractions were lasting longer than a minute and coming around 3mins apart. My consciousness was altered, and I was having more and more trouble recovering between waves. We called and asked my doula, Carissa, to come, as we weren’t sure when we needed to go to the hospital and wanted guidance.

I don’t remember the conversation, but apparently after she arrived at 10pm, Carissa asked me whether I wanted to go to the hospital or not and I said no. At that point Carissa called the midwives and requested they send someone.

Carissa squeezed my back pelvic bones together, which opened the front of my pelvis, and around 11:20pm I felt a shift in my urges – I was ready to push. After a moment of panic – I felt like it was too early! I had been ready to labour for days! I wasn’t at the hospital! – I realized that nothing was going to stop my baby from coming now and so I gave in to my body and what it was telling me.  I gave it my all. I hoped that each push would be my last, while knowing that Eva wasn’t yet where she needed to be to come out.  After pushing hard for a few cycles, and feeling a roundness that I thought was her head crowning, I heard a loud pop, like an explosion, and panicked – was she OK? My waters had finally broken… I quickly reached the point of overwhelm, where I needed reassurance, where I asked how long until it was over, where Simon whispering in my ear “I’m so proud of you” was all that kept me going. I was conscious of my mum encouraging me,  invoking my late grandmother through use of an aptly appropriate phrase that Grandma had used with me throughout my Olympic bid – “What a Woman!”.

In BC, two midwives need to be present for a home birth. The secondary on-call midwife showed up at 11:30pm, and the primary came direct from the hospital and arrived at 11:45pm. As per the request in my birth directive, I was invited to reach down and I felt Eva’s head. I was encouraged to make my breaths shallower and ‘pant Eva out’.  To my surprise, the urge to push dissipated and I was able to contemplate my last few moments as a non-parent, in the Quietude*. This is the top of the mountain after a hike, where you take in the view – quietly, tranquilly, and with wonder – before heading back down to earth.  A few small waves of muscle later, gentle encouragement stroking and coaxing her out, and Simon caught our baby girl, Eva, at 12:00:02am on Wednesday December 29, 2021. 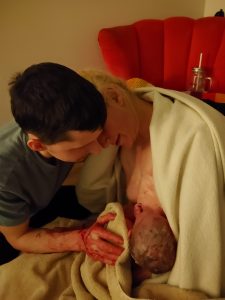